Walking around with a DSLR tends to intimidate people around me, or at the very least make them change the way they were behaving; their attitude, their posture, their general demeanor changes when they see a camera.  It might also be my own approach, I am more comfortable dealing with scenes where humans are incidental or just a part of it rather than the main subject.

I’ve talked about my experience with the DXO One before, its just so small and handy that once you get the hang of it, you can get some images that would otherwise be missed.  I was out on a walk with some other photogs, big DSLR in hand and saw a couple sitting on the seawall with a motorcycle a bit past them.  I slipped the DXO One out of my pocket in case it panned out to be a good shot….

I took about two images on the approach, but as I drew alongside, I saw a man walking in the distance and snapped two more, and was quite pleased with one of them.  Having a camera at the ready definitely works out better sometimes 🙂 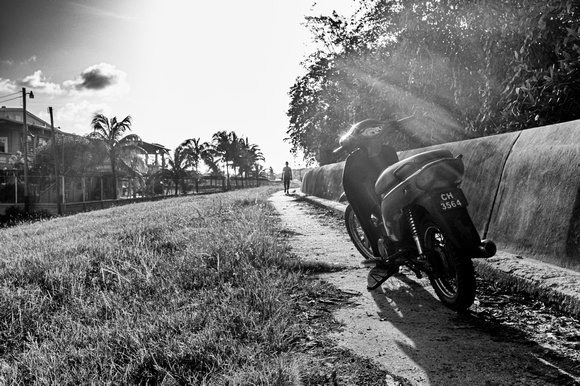 I guess my point is, as a photographer, we have to be at the ready at all times, because seconds, or fractions of a second makes the difference sometimes.

To see the image along with other images in the Black and White gallery, simply click on the image above.

Taking time away from the images can be a good thing… but it’s important to actually go back to them, because if you don’t, it becomes a matter of “out of sight, out of mind”…

This day was a good one, I really have to sort out a few more images from it 🙂

Buildings with character always fascinate me, but often I will look at the scene as I am passing and think, “it doesn’t feel right”; that has worked against me a few times already when one day I pass by and the building has been demolished.  If it were just for a record of the building, then any photo would do, but I don’t just want a record, I want a photo that speaks to me.

There’s a mosque / masjid at La Bonne Intention (LBI) that I often pass, and consider that there’s a photo there somewhere, but I seldom see what it is that I should be photographing, I’ve stopped to photograph it twice, the first time I was trying to force the photo, but the second time, I was about three villages away and saw the skies to the south and thought that this was a good opportunity to try the photo(s) that I wanted.

Even before reaching the mosque I knew that I’d be using multiple exposures for some HDR processing after.

Click on the image to see it in the Gallery.

I was about to title this post “The Monkey and The Camera”, because Nikhil might have been right about that day at La Bonne Intention, a monkey with a camera may well have managed to take a good photograph.

In hindsight, I really should have switch to my ultra-wide lens earlier that day, but even with the Tamron 18-270 mounted on the camera, I still got wide enough to capture the truly “awesome” sky that was prevalent at the time.

I’ll let this photo speak for itself. (Click to see larger)

The sky that day was a photographer’s dream, nice variety of clouds, a slowly setting sun, as Nikhil mentioned once “even a monkey could have gotten good photos that day”.  I’m not entirely sure about the monkey, but I know we came away with some good ones.

For me, I liked this one because of the clouds, and then there’s the lone man walking along the wall, and the lone bird soaring in the sky.

For anyone who has followed my through my blogging, you’ll have seen Nikhil’s name popping up with some regularity, we’re friends, and he’s also my photo-buddy.  In September of last year he came out with a spectacular image which has since been used by Kriti in their publication of the 2011 Scotiabank (Guyana) Calendar, it’s an amazing image, he titled it Resting Drama (if you click on the name you’ll see it on his site).

I was left stunned with his image and had not processed any of my images from that day, they will all pale in comparison.  Today I decided to process one, (I’ll get to the others eventually) this one was a three image HDR, whilst he faced north, I faced east, into the slowly setting sun.

I want to explain a few things; firstly, it’s a three image HDR (High Dynamic Range) trying to get the most detail out of the scene.  Secondly, it’s about the scene as it is depicted, I tried as much as possible to keep the image as “natural” as possible, sometimes HDRs can go overboard and look over-processed or even cartoonish.

The sky was cloudy, so we were in a shadowed setting with some cloud coverage overhead, heavier as you looked eastward,but far towards the east the sun was setting, and fewer clouds were in the sky that far east giving the sunlight entrance to the scene.  The sunlight bathed the seawall mildly or gently, You can see the wetness towards the sea reflecting the light, even the grass shoreward was lit to a degree.

I think I may be using too many words, I should just let the photo speak for itself.